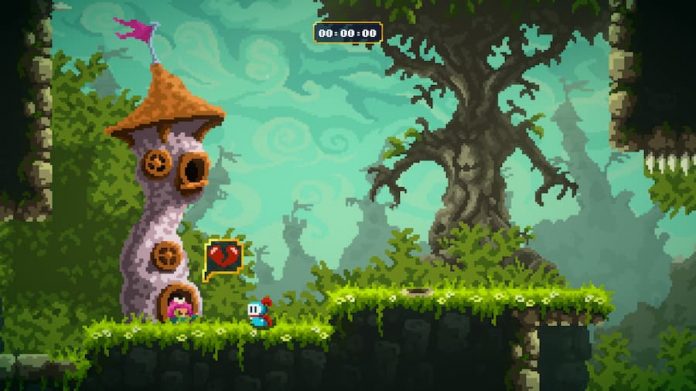 Let us leave Sir Lovelot’s sheer womanising aside. This tinfoil lothario is all about breaking the hearts of young maidens who seemingly let down their hair for nothing more than a freshly picked daisy.

He scales walls, leaps over endless pits of dangers, and defeats horrible monsters for a night of passion. Why he ends up breaking off relationships is anyone’s guess; it is how Sir Lovelot gets to those maidens we’re primarily concerned with.

Sir Lovelot, judging by his name, loves a lot. Each level of his eponymous adventure sees him tasked with reaching a damsel and bringing her items she has requested – first just a daisy, soon after a ring or a lollipop. Fulfilling these errands, he is let into their towers, before being kicked out in the morning for him to move onto the next lady. Reaching each lady requires precision platforming, utilising a double-jump teamed with a wall-jump to show of athleticism.

The developers are wearing their inspiration on their sleeve. It is hard not to think of Super Meat Boy when guiding our hero knight between spiky dangers and whirring buzzsaw blades. The problem with being so stark in showing your mood board is that your game will be compared endlessly. Sure, Pixel.lu has done what it can to differentiate itself, but while playing all I could think was “but this has been done better”. 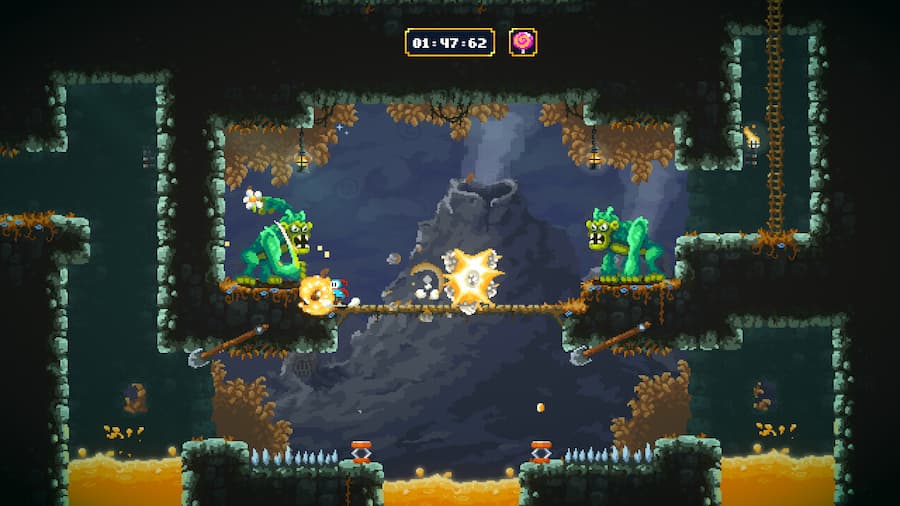 That is not to detract from Sir Lovelot too much. The platforming mechanics feel tight and responsive – well, unless our hero is in water, then he floats about all over the place. The visuals are a sumptuous, pixelated treat. Even the different styles of the four worlds available are well thought-out expansions on platforming tropes, with each new area introducing a new mechanic: swimming, bounce pads, gusts of air. The problem with Sir Lovelot comes from one very bizarre design choice.

When you start a level – which sprawls over several screens – you will see what dangers lay ahead. This already removes a large portion of difficulty, because you are planning your movement ahead of time. But the developers have made it even easier by adding checkpoints at the start of every screen and enemies stay dead once you have killed them with your weird laser gun. Let us say you kill the first enemy in the level but die on a buzzsaw. You will be taken back to the start, but that enemy is still dead. They do not respawn, forcing the player to learn patterns. Essentially it removes any difficulty. 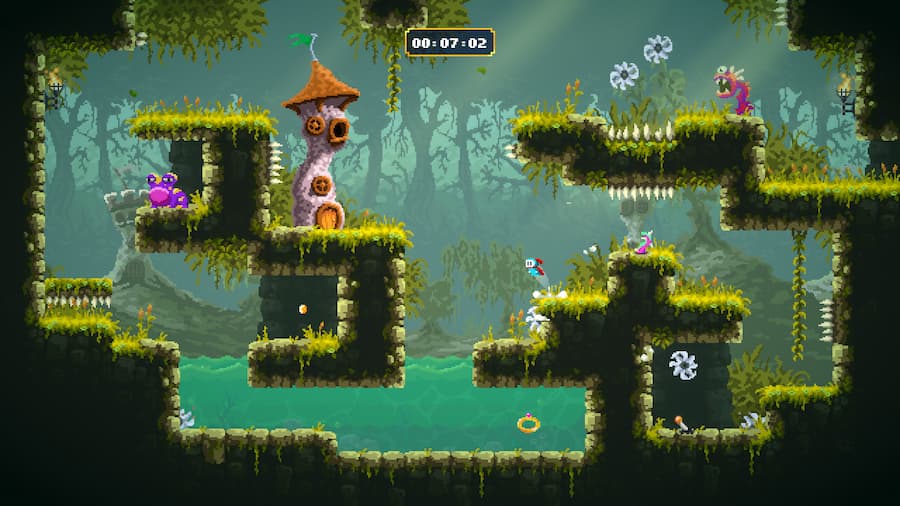 Because of this, all that smart platforming and genuinely interesting level design goes out the window. Of course, there is still some difficulty in dodging moving platforms or falling blocks, but even then, any sense of progression has been taken away. Add to this that later levels end up basically trolling the player by randomly spawning enemies that dash at you. They steal away an earnest attempt, and I must wonder if even the developers knew they had made mistakes.

So, here I am comparing Sir Lovelot to a game made eleven years ago. Had the developers made one or two slightly different decisions, Sir Lovelot would earn a place in my heart. Instead, I tore through the game in two hours – though this could be extended if you want to find all the hidden items and secrets. I felt deflated after every level. Like a jilted lover, Sir Lovelot did not perform.

Sir Lovelot is available on PC, PS4, PS5, Xbox One and Switch. We reviewed the PS5 version with a code provided by the game’s publisher.