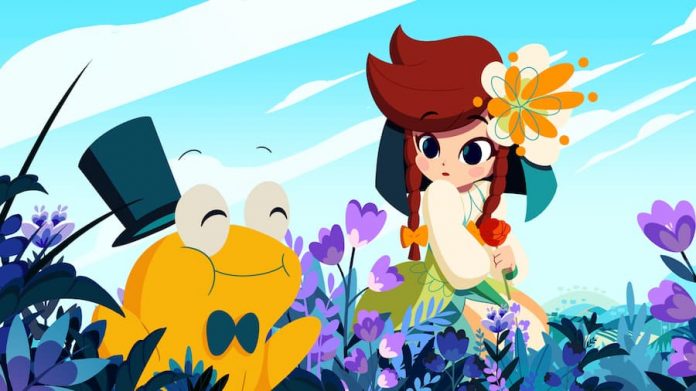 A JRPG that doesn’t come from Japan? That’s Cris Tales.

From a small team of Colombian developers, Cris Tales set out to be a love letter to the classic JRPGs of the 90s and early 2000s. Don’t let that fool you into thinking this is some copycat also-ran; rather the opposite, in fact. Cris Tales takes the spirit of a JRPG – the sense of adventure, a world ripe for exploring, turn-based battles and character progression – and turns it into something completely original. Cris Tales isn’t perfect, but if you are a fan of JRPGs, then I’m fairly confident in saying you’ll find a lot to love here.

Cris Tales is the story of Crisbell, an orphaned girl who’s just learned she’s a Time Mage. She has the power to manipulate time, you see – a very handy skill to have when dealing with matters of saving the world. Along with a party of friends and warriors – which will grow and change as you progress – Crisbell must travel to each of the four kingdoms of Crystallis in order to stop the Time Empress from destroying everything. The story packs in multiple twists and turns as you play through it, keeping you hooked until the credits ultimately roll.

Crisbell’s time powers are a key focus of the game, and they’re demonstrated in some rather novel ways. When visiting a kingdom, your screen will be split into three; at once, you’re able to see the past, present and the future. Take the slums of the kingdom of Saint Clarity, for example. With the sewers running directly underneath, they’re prone to flooding on a regular basis. In Crisbell’s vision of the future, the slums are entirely underwater. You have the power to change the outcome of a city, however; by engaging in side quests and interacting with the people you meet, you’ll be able to influence key decisions, which can change the future for the better. Or for the worse, depending what you choose. 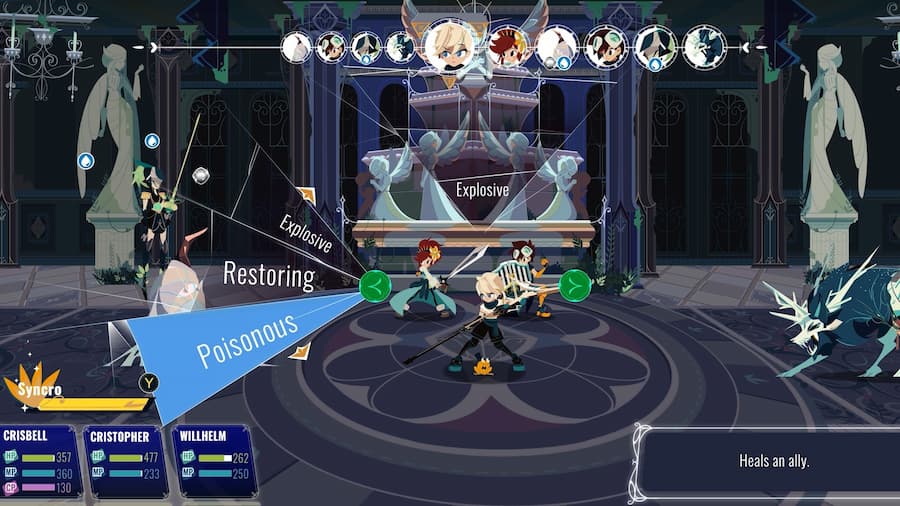 With the help of her amphibian sidekick Matias, Crisbell can also occasionally interact with the past and future iterations of the place she’s in. With the click of a button, Matias can jump to the future or the past; perhaps there are treasure chests hidden in those times that aren’t visible in the present. Or maybe there’s a conversation happening in the past that could reveal useful information, or a key item to be retrieved.

Those time powers also come into their own in battle. Crisbell is able to throw enemies into the past or into the future, both with interesting effects. Throwing an enemy into the past, for example, makes it younger and therefore often weaker. In the future, however, they may be older, stronger and more powerful. But combined with abilities of other members of your party, Crisbell’s time powers can wield very cool results. Do water damage to a metal enemy before sending them into the future and you may find they’ve become rusted; their defences weaker as a result. Or affect them with poison, which does damage over time; put them into the future, and they’ll receive that damage all at once. 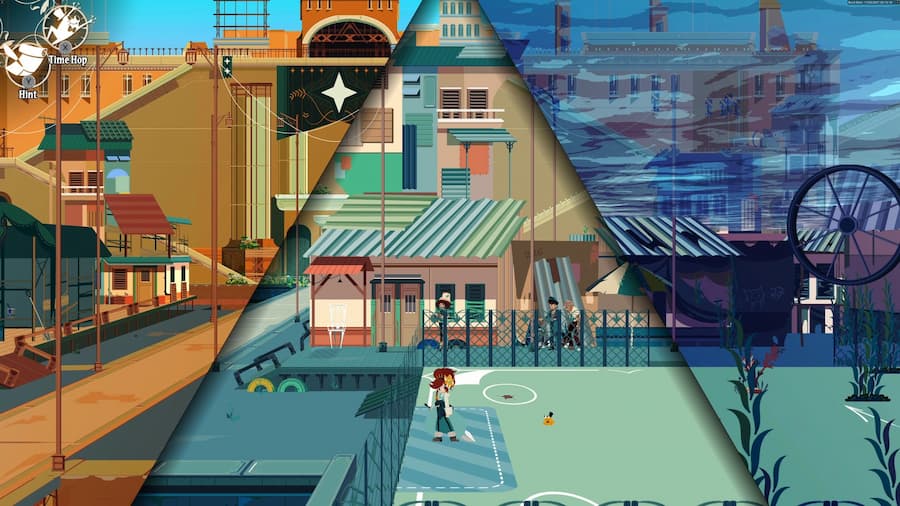 These skills make Cris Tales‘ combat unique and interesting, at least when they’re in use. But once the novelty wears off, you’ll likely find yourself sticking to more traditional combat styles; on bosses especially, there’s little need to use Crisbell’s time power. Her other skills – including healing and the ability to undo the effects of a character’s last turn – come into their own later on, but it’s a shame the time control is a little underutilised.

Despite that, combat on the whole is rather enjoyable. A typical turn-based affair, your characters can attack with their weapon, use a magic-powered skill, or use an item on each of their turns. Every character has a unique set of skills. Crisbell’s, for example, are all about offering support. Her loyal sidekick Cristopher, on the other hand, is powerful with all magic, and he’ll soon have lightning, water and fire powers in his arsenal. Then there’s Wilhelm, a maestro of natural magic; he can enchant tiny creatures to attack with magic on his behalf.

Characters you meet later on in the game are even more different. The mechanical JKR-721, for example, doesn’t have a magical power gauge; instead, he has a overheat meter which you need to keep an eye on. Zas’s main attack involves pulling random weapons out of her bag, and her magical attacks are drawn at random, too. Then there’s another character – I won’t tell you which one (spoilers!) – who channels their inner Ash Ketchum by catching weakened enemies to summon into future battles. You’ll likely have your favourite party members and stick with these, but it is worth experimenting once in a while. 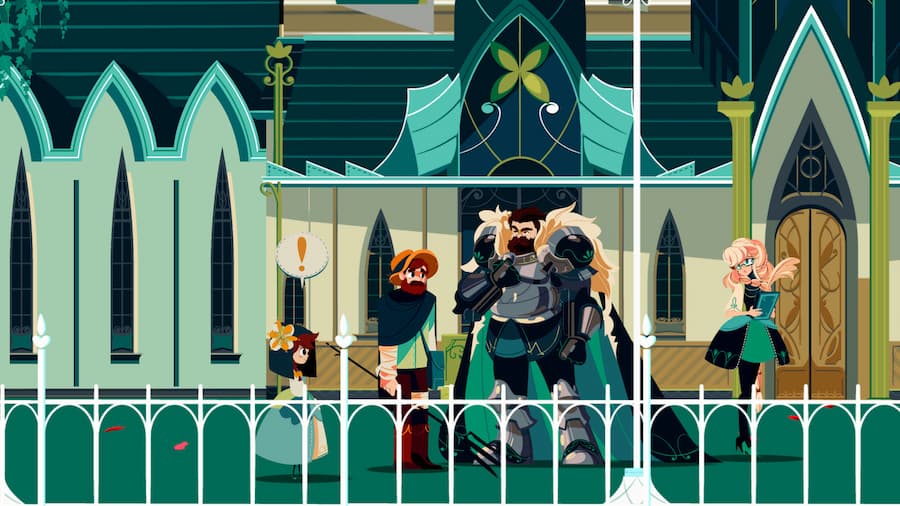 One of my biggest gripes about Cris Tales is something fairly common in the genre: occasionally, too many random battles are thrown at you. Engaging in combat of course has its advantages: your party earns experience, and you’ll also gain marbles – the in-game currency – which you can spend on weapon upgrades and new equipment. The trouble is, these random battles tend to happen in areas where exploration and occasional puzzle-solving is key. Getting interrupted every 30 seconds or less to fight some grunts disrupts the flow of your concentration – and unless you have a certain piece of equipment (which isn’t available until later in the game) there’s no way to avoid starting a random battle.

It’s also a shame that, playing on PS5, Cris Tales doesn’t make any use of the DualSense controller functionality. Some feedback during combat would have elevated battles to the next level. Or perhaps, when looking for something in the environment, a small rumble could have been employed to let you know it’s nearby. Instead, the controller remains deathly still and underutilised. It’s of course not a deal breaker, but with no other noticeable PS5 improvements – there are still loading screens, and it’s running at a resolution much lower than 4K – it doesn’t make much sense why there’s a dedicated next-gen version at all. 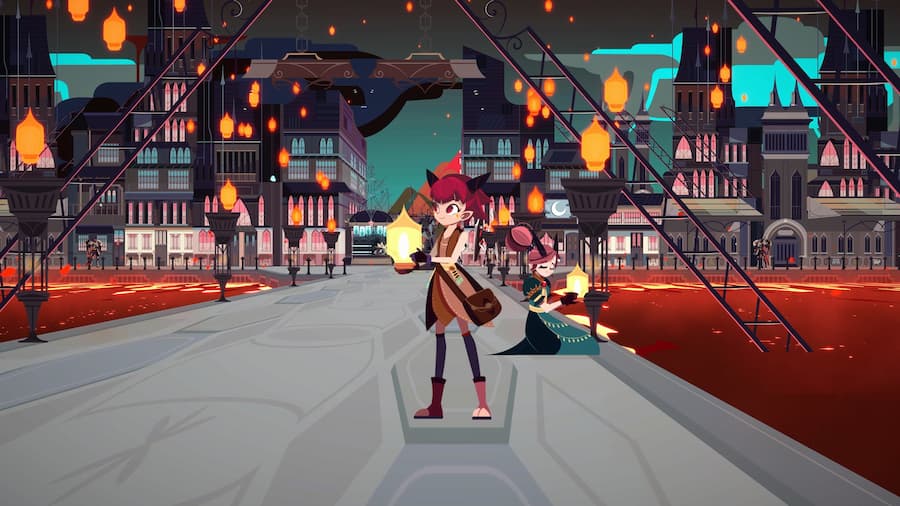 But let’s talk about everything that makes Cris Tales so wonderful. Its visuals, for one; truly, this is a stunning game. I frequently hit the ‘capture’ button on my controller, in awe of the scenes that confronted me every time I entered a new location. It’s a truly standout game in the genre in terms of its art, taking on a style all of its own. Surprising, too, is the game’s voice acting. Every single line of text in the game has been recorded, and all by a team of talented actors. There isn’t a duff line amongst them, and it truly elevates the game to the next level. Brought to life with so much attention, it’s easy to come to care for Cris Tales‘ cast of characters. Each one of them has their own lovable personality and it makes spending time in their company a joy – even if you’re gritting your teeth from fighting your seventeenth slime in a row.

Regardless of its issues, there’s no denying that Cris Tales fulfils the mission its developers set out to achieve, and with gusto: this truly is a gorgeous love letter to classic JRPGs. An epic story combined with a truly beautiful visual style will keep you hooked until the credits roll. With a small update here and there, Cris Tales has all the makings of a modern classic.

This review of Cris Tales is based on the PS5 version of the game, with a code provided by the publisher. It’s available on PS4, PS5, Xbox One, Xbox Series X/S, Switch and PC.