It’s also just received its latest expansion, Shadowbringers, which received an incredibly warm reception. Now’s the best time to dig into one of the best MMOs on PS4, and perhaps of all time. 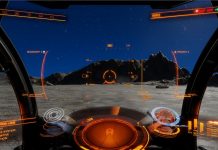