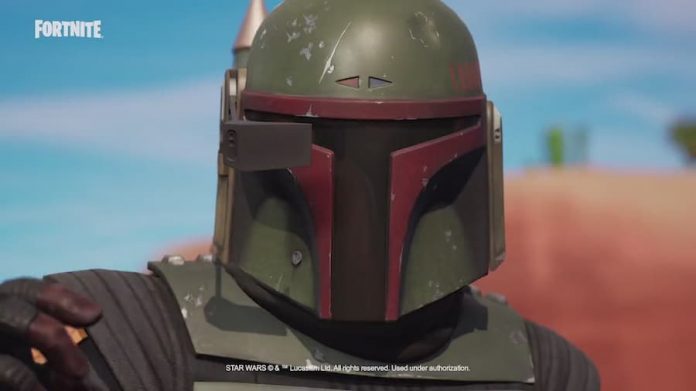 Fancy playing as Boba Fett? Fortnite has got you covered.

Technically, several Lego Star Wars and Star Wars Battlefront games have you covered but how many of those will let you do the Get Scwhiffy emote, eh? It’s no coincidence this costume has been released, however. This Wednesday sees the start of Disney+’s The Book of Boba Fett series, so the Boba Fett costume/model has been released to promote that.

How do you get the skin? Like previous skins, it has to be unlocked for 1,500 V-Bucks. You may, if you’re lucky, have earned enough V-Bucks (and not spent them) but chances are you’ll have to spend real money to get it.

Will we be dressing up as Boba Fett? Probably not. Since we grew up watching Star Wars: Return of the Jedi, our main memory of Boba Fett is of him screaming as he falls into the Sarlacc. It’s not even that Han Solo outguns him, he doesn’t know Boba’s there, he just turns around and accidentally whacks him with weapon (insert your own mucky joke here) It’s only thanks to the extended/non-movie universe, plus the fact you don’t see his face, that he’s become cool.

If you can survive a sarlacc pit, nothing’s impossible!

You can get Boba Fett’s outfit right now, for the princely sum of 1,500 V-Bucks. There’s no news on Fennec Shand, Boba’s right hand man, but she may well put in an appearance later. The series, which sees Boba move from bounty hunter to crimelord, is on Disney+ this Wednesday 29th December, with a new episode dropping each week.