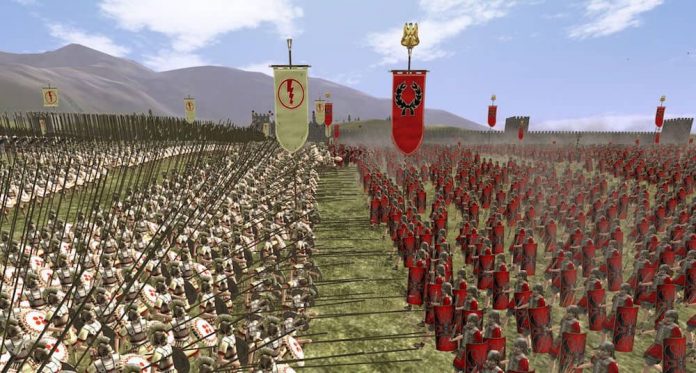 Since the year 2000, Creative Assembly have been showing us history in its most brutal form. From the Roman to the French empires, the Total War series has given players the opportunity to live through the most glorious and most turbulent times in human history.

Even now, after 10+ years playing the Total War series, I cannot equivocally say which Total War game is my favourite. This speaks volumes to the quality of each iteration. I haven’t played the original Shogun: Total War or Attilla: Total War, so perhaps I can’t say which is the best in the series (even though most would agree Medieval II), but I can say they’ve rarely had a misstep.

Why is Total War so popular? It certainly is unique in what it attempts. RTS powerhouses like Company of Heroes and Starcraft focus almost exclusively on the scene to scene combat. Everything is about the battlefield. You would imagine a game series with the name Total War to do the same, but although the combat is a heavy focus, it’s only one of its two aspects. Strategy in combat and strategy outside of combat form the two-sided coin that is a Total War game. I personally cannot wait to see what they do with this side of the game in Warhammer: Total War, with the vastness of the Warhammer universe at creative assembly’s fingertips. Some might brush this off as surplus to the action, but the tactics of the campaign map screen are some of the Total War series’ most exciting moments. A testament to what they have achieved in this area is the fact that you can play the game and barely explore the fighting aspects. The campaign screen, in my opinion, offers more than something like Civilisation. I have always viewed the Civilisation series in a kind of Total War light. I am aware of the differences in each game, and how both have different goals to aim for, but the similarities are also readily apparent. The complexity of the Total War series is just that much better, and it makes the game a whole different beast. It is more comparable with Crusader Kings in what it aims to achieve. The subtleties of the strategy in the game (killing off rival generals within your own faction in battle for example) make you feel like that masterful tactician, pulling every string and working each situation to your own advantage. Being a masterful tactician out of combat is as vital as your combat strategems.

Another reason for the series’ success is of course the battle system. It is the reason that many people pick up the game and for me is the meat of the game. Pitting two vast armies against each other has its own thrills, but it’s when you are controlling the inferior force where things become the most interesting, as well as the most challenging. I challenge any Total War player to not shout “for king [or queen] and country!” when repelling the inevitable French invasion of the British in Empire: Total War. Few games offer the same rush of excitement that a Total War game does, and fewer offer the catharsis when you finally see victory flash up on screen. You are also never content to sit on your laurels when it comes to the battles, thanks to the post battle statistics screen. Showing you each and every loss in your amy motivates you to try harder to preserve your forces, for pragmatic reasons such as money, and for the emotional attachment you inevitably develop for your own troops (why do they let you name them?!). All of this adds to the immersion of any already immersive game. Funny then, that the passion I have for the Total War games has nothing to do with the gameplay as such. What I really love about Total War, and in fact what made me take notice of the series in the first place, is the series’ grounding in history. This is not to take anything away from the upcoming Warhammer: Total War, but being able to relive pivotal moments in history, those moments that you read about in school – such as the sacking of Carthage by the Romans – are brilliant to either re-enact on the grand campaign, or in specific historical battles. In the same vein, it’s also a blast creating your own story, leaving your own mark on history. Do you want a world controlled by the Holy Roman Empire? Are the Oda clan the rightful rulers of Japan? These are the decisions you get to make in Total War. In fact, the history surrounding the series is one of the reasons I began to love history and want to persue it in my life.

I am just as excited for Warhammer: Total War for a different reason than the history however. The unit diversity on the battlefield is what excites me the most. For the first time in the series there are giant units and flying units which bring new tactics to the series. It amazes me that after 10 games in the series, Creative Assembly are still reworking, tweaking and generally improving the combat mechanics in the game. Not once have I come to a new release and become bored of the combat. The new features they have added on the previews that have been shown prove the comitment to the series Creative Assembly have – they care about their games. I for one have always dreamed of riding a griffin into battle… but that’s just me. And that in a nutshell shows the spirit of the series. It’s total freedom, total fun, total war.

So for all this, I salute you Creative Assembly. I hope you keep making great games in the future.