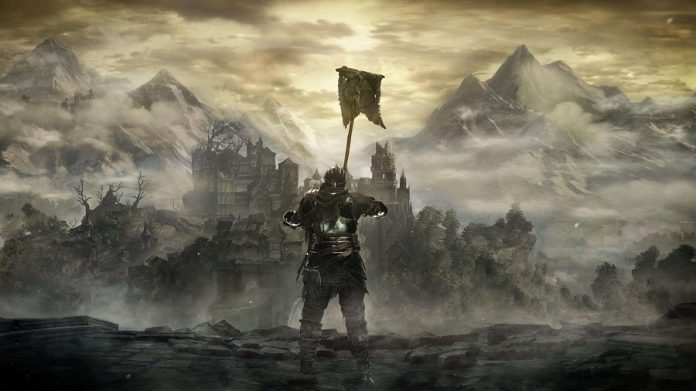 As I write this I have just finished my first playthrough of Dark Souls III. A truly awe inspiring, rewarding game that fuses together all of the best parts of the past seven years of From Software’s Souls games, including Demon’s Souls and Bloodborne, making what I find to be unarguably one of the best game series of all time. The funny thing is that I outright rejected these games for six of those seven years. Yep, until recently, I outright refused to play my favorite game series of all-time. So how did I go from not playing Dark Souls or its spiritual predecessor/successor to them becoming my favorite series of games of all-time? It’s a long story to get there, but to sum up, these games have the purest and most technically sound gameplay I have ever experienced.

I’ve been gaming for a long time. Over three and a half decades, actually, factoring in the countless hours spent in the arcade at the local mall while my family shopped for clothes and such. I’ve always been drawn to them. As a child I didn’t fully appreciate what it is about video games that hooked me. I just knew I enjoyed starting a game and finishing it. Gaming has always been my favorite hobby and I’ve always made sure that I’ve played as many games as possible. In recent years I’ve become more forgiving of the concessions developers have made in order to make their games accessible and beatable. Waypoints, reminders of the controls hours into the game, minimaps, collectable markers on the world map, forgiving  save and check points, regenerative health, etc. I’ve become complacent and content. So much so that I completely rejected the notion of playing a game like Dark Souls – no hand holding, obtuse, and difficult.

This was the case for years. Ever since I heard about Demon’s Souls and its difficulty, obscure direction and story, the whole nine. When Dark Souls released in 2011, I completely ignored it to the point that I wasn’t even aware it released the same year as Skyrim, which was my game of 2011. Dark Souls II released and while I was aware of it, again, I ignored it. I chalked them up as a series that “wasn’t for me,” like racing and fighting games. Except with racing and fighting games I had enough experience with them that I could make a semi-informed decision on how I would spend my time. This wasn’t the case with the Dark Souls games. I had never played any of them and based by decision solely on what I had heard, not what I had experienced. That all changed when I rented Bloodborne from Gamefly. I had a hole in my queue and nothing to play so I decided to give it a shot. To sum up, I fell in love. 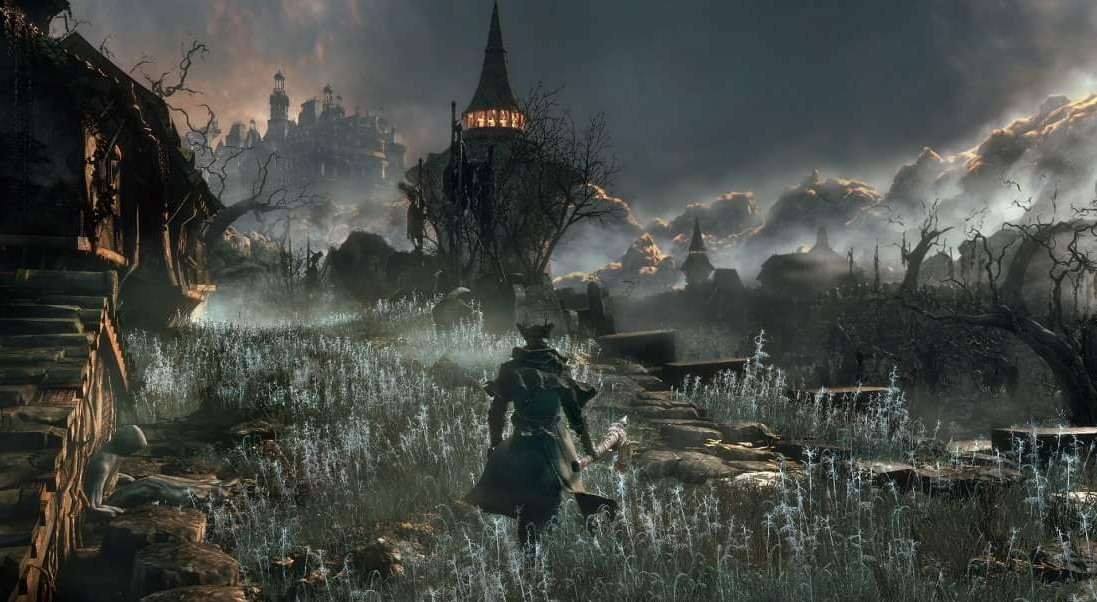 It wasn’t the atmosphere, it wasn’t the graphics, it wasn’t the world – don’t get me wrong, those are all high on the list of things I praise the game for, but it was the most fundamental thing: the gameplay. It was so pure and rewarding. A large reason for that is the trust that From has in their players. Dark Souls and its kin don’t hold your hand not because they want to punish you, but because they trust and respect you as an intelligent human being; that you are capable of learning the systems that are in the game. All of the systems are there for you to play around with, discover and learn. Enemy placement and behavior is there for you to learn and the more you learn the more success you will have. From understands the satisfaction of overcoming seemingly insurmountable odds of felling a tough enemy, the immense relief of finding a shortcut to the next checkpoint (bonfire) or boss fight. They understand these things and meticulously design their games around these concepts.

I interact with people often who, like I had prior to playing them, reject Dark Souls because they seemingly don’t like design decisions such as the lack of saving often, the lack of a map, the lack of any sort of visual tutorial. And I understand that, I do, but that is a symptom of the problem with gaming today. Do I think every game should be harder or more challenging? Absolutely not. The problem with gaming today is that developers often don’t trust their players enough to learn. I can’t even begin to count the amount of games that continuously display button prompts on screen to go into cover, or recover from a flubbed platforming attempt. As if I didn’t get it the first time, or the sixth or the hundredth. FromSoftware eschews these decisions and puts players into the world in clever ways. They introduce the player to several concepts at the same time such as messages. In the starting area of Dark Souls III you see messages on the floor and when you read them you see the “tutorial” that explains how to attack, how to run, how to block, how to dodge; the key tenets of the game. Now you know that messages are worth reading and can mean the difference between life and death going forward. 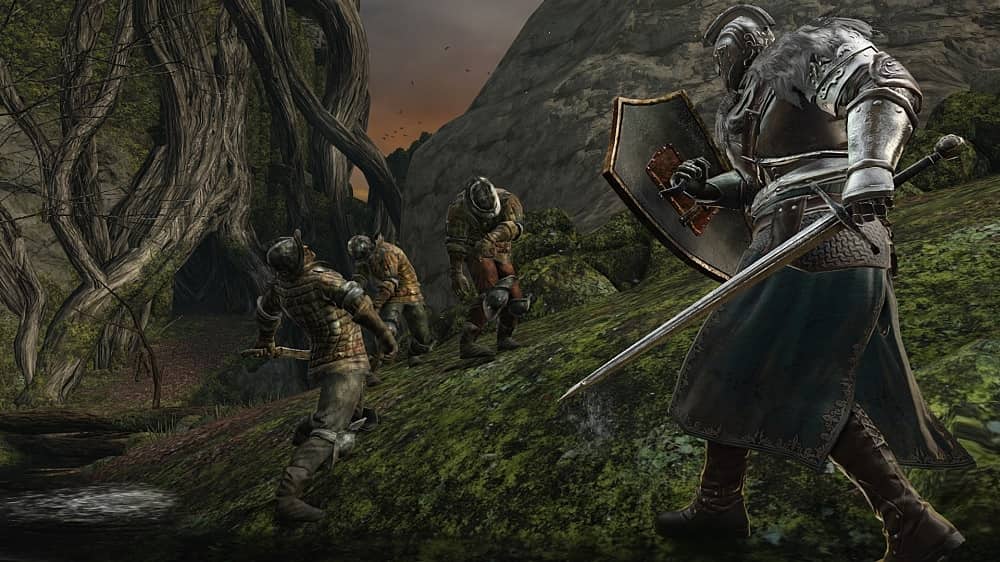 The save system is another bone of contention for people. They don’t want to have to go through an entire area again to regain the “XP” you lost because you died. Maybe it’s the old school RPG fan in me but I find this mechanic to be far more forgiving than that of Final Fantasy VI in which you could die on a multiphase boss and be forced to fight all the same enemies again or more due to the nature of how encounters work in that game. In the Dark Souls games you can run past every enemy to return to the boss and retrieve your souls/Bloodechoes during the fight, or you can kill everything again and double your haul – something you can’t do in any other RPG. Success means you’ll have a large “XP” pool to level up from.

I understand that many gamers didn’t cut their teeth on old school JRPGs and now have games that allow you to save anywhere, and while I do appreciate and use this mechanic when given to me, there is something so smart about the way this design decision is employed in the Souls games. It plays into the entire risk/reward system of the series. Do you cash in as soon as you can earn a level or do you push on and hope to earn the currency for more levels? Pushing on puts you at risk to have to travel through the area again, fighting or not, until you at least find that ever-satisfying shortcut through the area. Cashing in means you’re safe, and you can spend what you earned without stress, but it also resets all of the enemies in the area and if you didn’t find that shortcut, it could mean another 30 minutes to an hour of your time putting you back at the same decision you had to make. For the record, I never cash in until I’ve reached that shortcut. 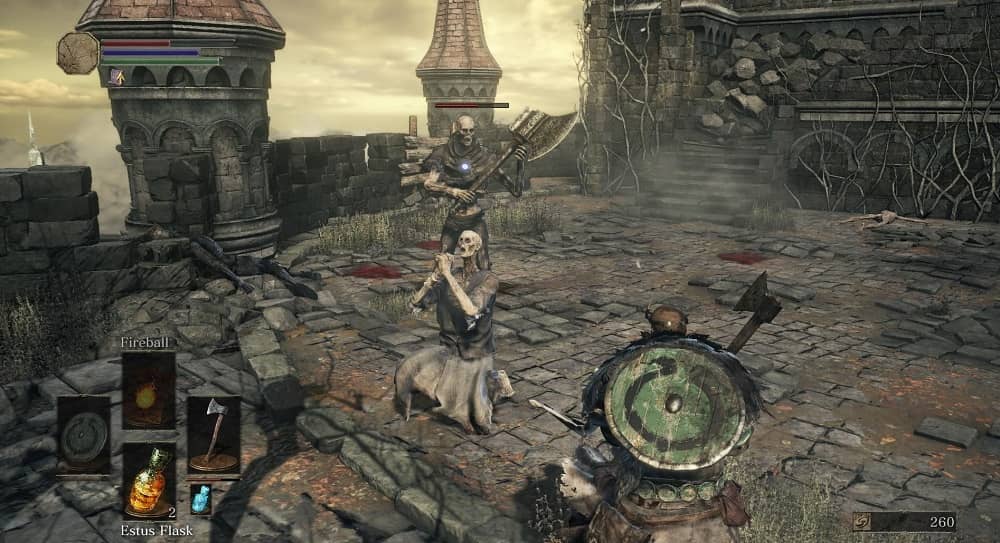 Can we talk about the satisfying and utter shoulder weight-lifting act of finding that shortcut? I would argue that it might be even more gratifying than killing the boss. This means your hard work has paid off; it means that you no longer have to go through an especially tough area again and it means that you’ve got a clear run to the area you left off at or the boss itself. That is in no way to diminish the satisfaction of killing a boss. However, when you kill a boss, for better or worse, that means you have to venture to a new area and relive that sense of dread I mentioned earlier. Sure, that’s part of the joy of  the Dark Souls games, but make no mistake, dread is an oppressive feeling whereas satisfaction is a relieving one. And all of this is based on the simple concept of opening a door previously locked and emerging into a familiar area with your bonfire/lamp.  This speaks to the genius design of Dark Souls. From is so aware of their design and the psychology of the player that this is not just a trope of the Souls games, it’s one that works as intended every single time. Over the course of five different games, this shared mechanic is universally satisfying to every single player every single time it happens in the game.

I really don’t want to seem like I am being critical of games that do offer guidance to players with maps, button prompts, or whatever the player may need to get through a game. If a player favors story over gameplay, these mechanics greatly aid those players to reach that end and mitigate frustration in ways that allow them to enjoy what they love most about video games. If you’re like me and find gameplay to be paramount and you haven’t played Demon’s Souls, Dark Souls or Bloodborne in the fear of frustration or being taken out of the comfort zone video games have put us in for the past decade, shake it off, put the controller in your hand and give any one of these games a shot. There is a good chance you will enjoy yourself, and even better, discover or rediscover something about yourself that you never knew was there or have forgotten.