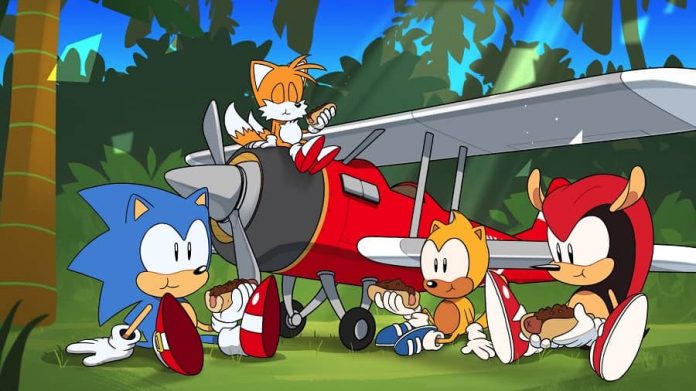 Outside of Tails and Knuckles, I pretty much loathe all of the friends Sonic has had over the years.

Amy Rose? Bleurgh. Big the Cat & Froggy? Please, no. Vector the Crocodile? Get out of town. But there’s one, thanks to Sonic Mania, who has won me over: Ray the Flying Squirrel.

I have to admit, before his appearance in Sonic Mania‘s latest DLC – or Sonic Mania Plus if you like buying fancy pants physical editions of games – I didn’t even know that Ray the Flying Squirrel existed. Apparently he, along with the other character introduced to Sonic Mania via its Encore DLC, Mighty the Armadillo, first appeared in SegaSonic the Hedgehog. Yeah, I’d not heard of it before either.

An arcade game developed by Sega AM3, SegaSonic the Hedgehog didn’t have much reach outside of Japan, which probably explains why it’s so obscure. Plus, being an isometric platformer rather than a standard Sonic game, I can’t imagine too many fans being upset about missing out on it. Still, because of it we have Ray the Flying Squirrel, and I’m glad.

Going into Sonic Mania‘s Encore mode, I wasn’t aware of just how little time I’d probably end up playing as Sonic in it. I thought I’d have a choice of characters as usual, and that I’d be able to just forget that Ray and Mighty existed. Forced to choose between one or the other’s companionship at the outset, however, I opted for Ray. And when Sonic died and I subsequently took control of the cheery yellow squirrel, I never looked back.

Ray’s happiness is simply infectious. You only have to look at him to feel all warm inside. He’s bright and lively, and his thick tail makes him sickeningly cute. It might all be a facade, in his head he might be thinking of 50 ways to torture Sonic, but I don’t care; to look at him is to simply adore him. And then I reached the Flying Battery Zone.

By the time I’d reached the Flying Battery Zone, I’d already been won over by Ray the Flying Squirrel. But then I saw how he negotiated monkey bars, and honestly, it pushed me over the edge. He just oozes finesse and confidence; move over Sonic, Ray is the slickest guy in town. Want proof? Take a look below.

So yeah, I might have a little man-crush on this little yellow fella. After 25 years, Sonic the Hedgehog has finally met his match. If the next Sonic game doesn’t have Ray the Flying Squirrel in it, I will be severely disappointed.