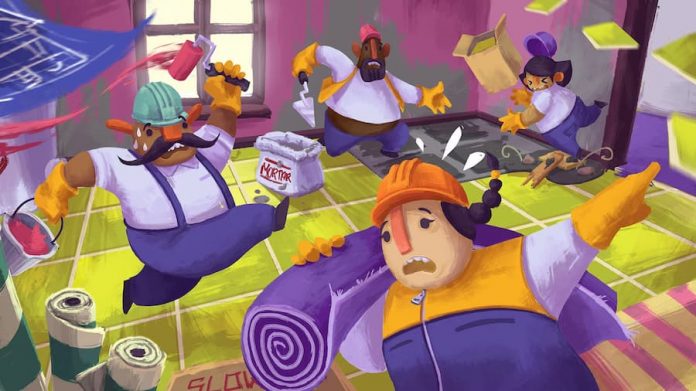 I’ll be honest, I’ve never watched a home renovation show in its entirety.

I might come across them in the dentist or doctor’s office, but I’ve never willingly sought them out.

That isn’t to say that the idea of renovating my own home isn’t something I would enjoy; I think I would – but the idea of watching someone tidy up someone else’s home? I just don’t care. I thought that Tools Up!, a new co-op multiplayer game from developer The Knights of Duty might change my mind. Maybe renovating houses with some friends could be fun, especially when you add the hilarity and panic of a time crunch.

Tools Up! is a hectic multiplayer renovating game where you work together with your fellow construction workers to repair a bunch of houses that are in quite a bit of disarray. You’ll paint, remove and replace carpet, plaster up walls and more. The further you progress the harder the levels become, and the more you’ll have to strategise with your team to get the job done as best you can within the time limit.

When you first start Tools Up! you’re given a very brief idea of how the controls work. Hold down one button to pick things up and interact with them, use another button to throw things and so on and so forth. Unfortunately, this single page of instructions did nothing to help my friend and I when we loaded up the first level. We were faced with a home comprised of a few rooms. We had access to a bucket and a paint can – but we couldn’t, for the life of us, figure out how to do anything. There are absolutely no instructions whatsoever to tell you what you should be doing or how to do it. If I hadn’t watched a gameplay trailer for the game ahead of time I might not even have known that we were meant to be renovating the place. 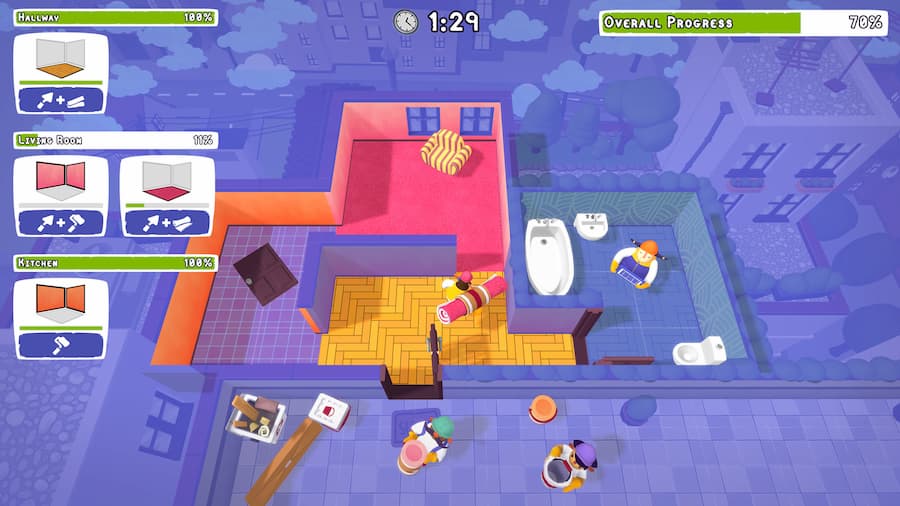 Once we finally figured out how to pick up and paint the walls of this home (after about ten minutes of flailing about cluelessly), the pace quickened. Each level has a blueprint that, when picked up, highlights the tasks that are set out for the players. For example, one room in a house may be an old, crusty pink colour. When you look at the blueprint, it will show the room as a vibrant new pink, so you know you need to replace the paint in that room. There are also boxes on the left side of the screen that show how many tasks you need to complete to finish the level: two repaintings and a re-carpeting, for example.

You’l come across a wider variety of tasks as you keep playing, but unfortunately the tasks never vary too much after you learn them all. You’ll spend most of the game painting, putting in carpet, putting down tiles and a few more things over and over again until you inevitably find yourself dreaming about your own home getting such a makeover.

Tools Up! plays a lot like Overcooked, where you’ll be pushing and shoving your friends around in your tiny space while trying to get things done within the time constraint. Unfortunately, it just doesn’t stand up as well. For one, your character moves painfully slowly, and you’ll be travelling in and out of your homes a lot. The trash can is located outside and you’re unable to move it – so if you have a room all the way at the back of the house that needs all of its carpet taken out you’ll have to individually pick up each square of carpet and track all the way through the house outside to the bin and back again. And repeat eight or nine times. 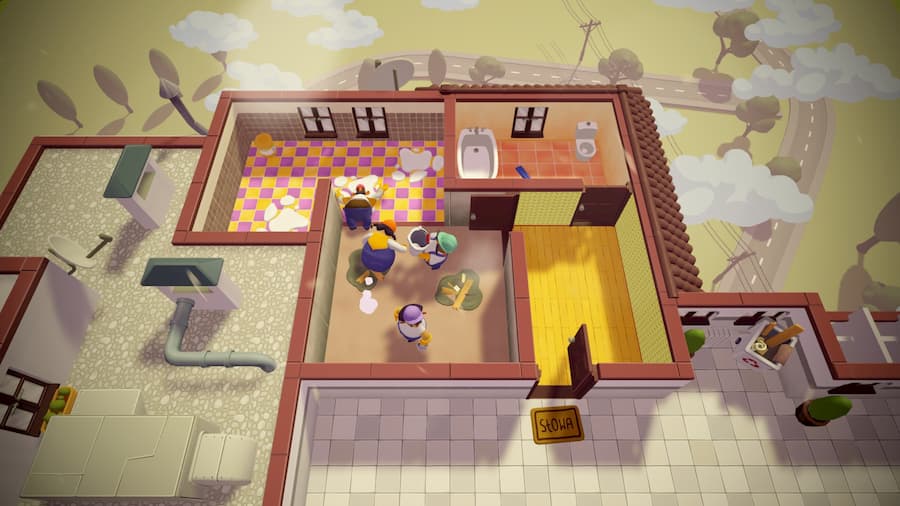 It’s understandable that it’s meant to be hectic and challenging, so characters speeding efficiently about the level may be to the contrary, but we ended up finishing each level of Tools Up! – including the first few that are meant to be the easiest – with only seconds to spare due to the speed in which our characters were moving. Having even just a single burst of speed every few seconds would have saved us from replaying the same levels over and over again.

Tools Up! also has some bugs still to work out. One particularly frustrating bug occurred on a later level that featured a pool/water feature. I needed to pick up a bucket out of the water, but instead my character started to climb down a ladder and got stuck in a constant loop, knocking against the paint bucket while trying to take step down the ladder to get into the water. I also felt that the throwing mechanic in the game wasn’t particularly useful since our characters rarely threw an object in the direction that we were aiming. There are many other small things that caused me and my co-op buddy more stress and frustration then a real challenge including: things going off screen where we were unable to see it, doors getting stuck inside walls, and being unable to pick things up. These issues may be fixed with an update, but for now it discourages those of us that might try to go for those enticing three stars on every level. 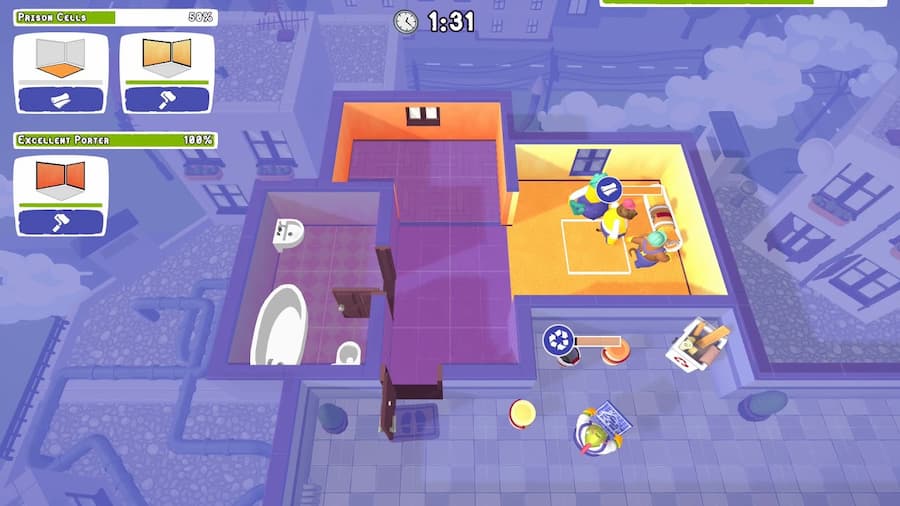 That’s not to say that Tools Up! is all bad though. Frenetic co-op games are meant to be fun, and my friend and I laughed our heads off when things went wrong – like when I accidentally filled an entire room with spilled paint and we started slipping and falling all over it. We even once got so frustrated that my friend threw my character in a river, resulting in another laughing fit. But as soon as you start trying to take it seriously and get a high score, you realise that Tools Up! seems to be working against you in every way, trying to keep you from being able to do so. By the end of it, we quite literally wanted to throw ourselves in an ice cold river.

Once you’ve figured out what you’re supposed to be doing, Tools Up! is good for a few laughs with a friend or two. But don’t expect to take the game seriously; if you’re aiming for three-star success you’re likely to find it more frustrating than fun. The bugs I encountered while playing just compound the issue – which is a shame, as there’s some enjoyment to be had with the right co-op partners. That said, I’ll be on the lookout for updates and any future DLC that might add some new environments or different mechanics to the game. Something to spice up Tools Up! would go a really long way.

Tools Up! is available on PC, PS4, Xbox One and Switch. We reviewed the Xbox One version.