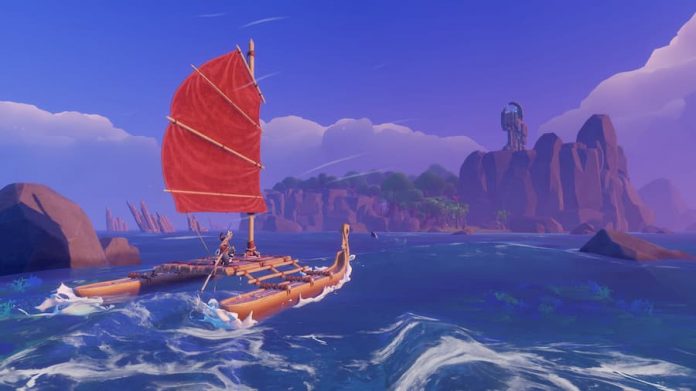 Survival games are a dime a dozen these days. So as a developer, how do you make yours stand out from the crowd?

In the case of 5 Lives Studios, they’ve given their upcoming survival game, Windbound, an utterly gorgeous art style. And to further differentiate it from the raft of competing games available, they’ve also injected a hefty dose of exploration of the nautical kind.

I recently went hands-on with Windbound, spending time in two chapters of its Storyteller mode. I learned how to craft, took on hostile creatures, climbed mysterious structures, and, more importantly, sailed some seas. I wasn’t overjoyed with everything I experienced, but overall I feel like a lot of players are going to be happy with the game.

Windbound casts you as Kara, a young woman who’s washed up on the shores of the Forbidden Islands. She’s not just going to sit there, twiddle her thumbs and cry about it though; as a capable warrior, she springs into action, eager to not only survive, but also discover the secrets of the mysterious paradise she’s found herself in.

The first chapter of Windbound‘s Storyteller mode serves up numerous tutorials to get you up to speed. Initially you learn how to gather resources, then how to use what you’ve collected to create weapons and other useful items. It’s once you’ve succumbed to your curiosity and investigated a strange structure that Windbound really kicks up a gear, however. 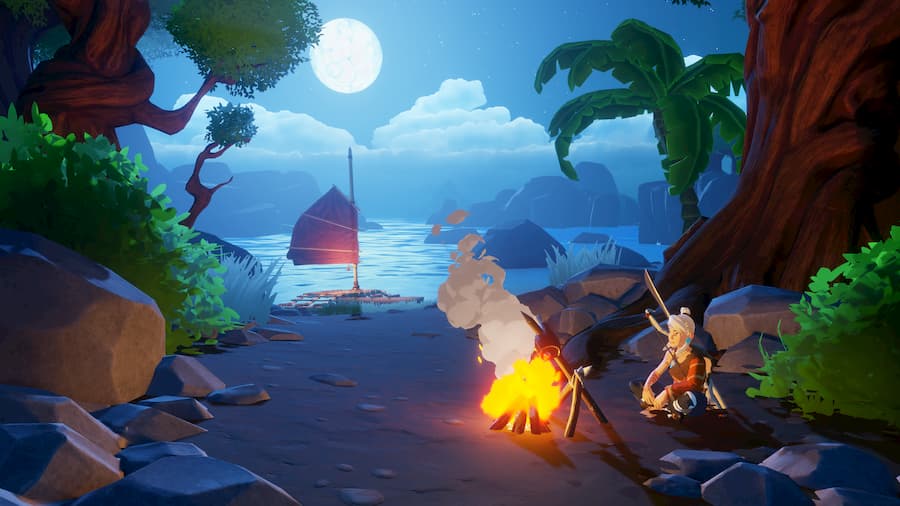 After finding a mysterious oar, you’re coerced to build a basic seafaring boat. And you’ll definitely need one, because the islands you’ve initially found yourself on aren’t exactly rife with vegetation, or much to see and do. And so build a boat you do, before taking to the seas to see what else awaits for you among the Forbidden Islands.

While survival is key to Windbound, in Storyteller mode there’s also the matter of progression. Your goal in the chapters I was privy to was to find three pillar-like structures, climb them, then activate the conch-shaped device at the top. Once all three had been activated, all that was left to do was find a strange portal device to progress to a new area. 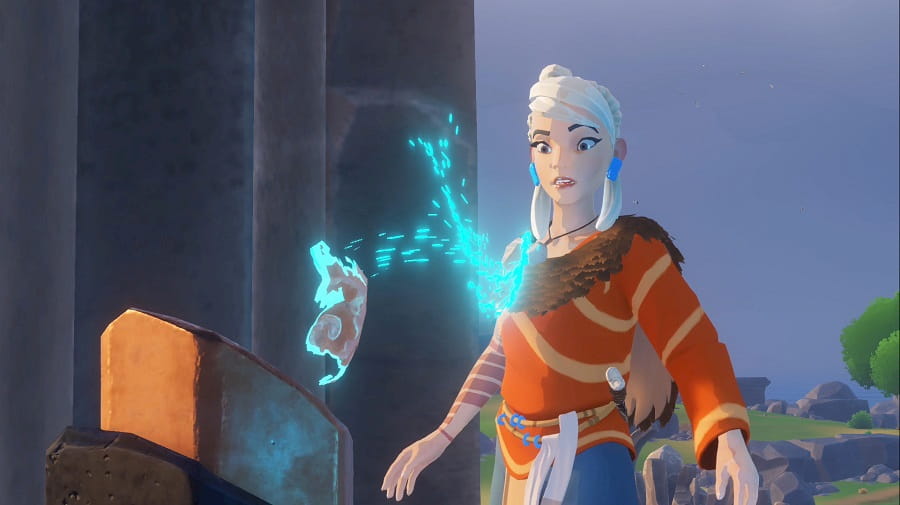 Snacks such as berries can be picked from bushes or consumed on the spot, staving off hunger for just a little while. For a more hearty meal, you’ll have to craft a weapon, hunt an animal, and then create a fire on which to cook the meat. That takes time and has its own risks, however. I personally was glad to encounter some giant mushrooms on my travels. Not only could I consume them on the spot, but they restored a considerable amount of hunger and health.

Like any survival game with crafting as a central mechanic, you start with pretty much nothing in Windbound. As you begin to gather stones, strands of tall grass and other materials, however, you’re able to craft useful items and equipment to improve your chances of survival. A stick makes a handy makeshift spear when one of its tips has been sharpened, and who knows what you’ll discover once you’ve made a tool with which you can dig.

What’s notable about Windbound‘s crafting system is that it seems much easier to navigate and get your head around than many others. Within minutes you’ll have the means to defend yourself. Not long after that you’ll have expanded your means of gathering resources. You get the impression that the game wants to empower rather than confuse and mystify you, and it’s welcome. 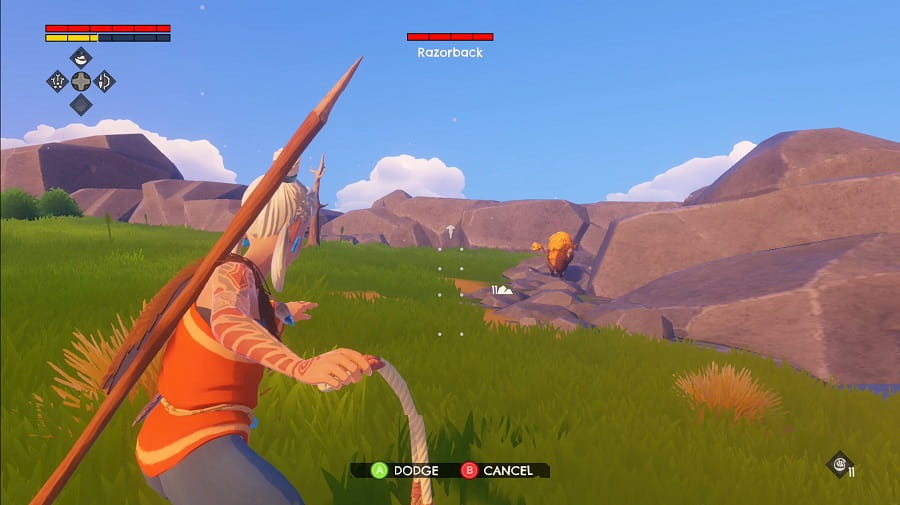 There’s the boat-building aspect to consider, too. I didn’t really get the chance to upgrade my basic boat in the preview, but jumping ahead to the game’s fourth chapter, I was provided one that was much more fancy, although perhaps a little lop-sided. It had a sail so it could make benefit of the wind, and was also equipped with a fire to cook food and a cauldron for potions. No expense was spared.

But as much as I enjoyed the environments offered to me by Windbound, its combat left a lot to be desired. It just feels scrappy at this point, making encounters more frustrating than they should be, especially when facing off against multiple enemies at once. Though the nature of the preview, streaming the game from another location, probably didn’t help. 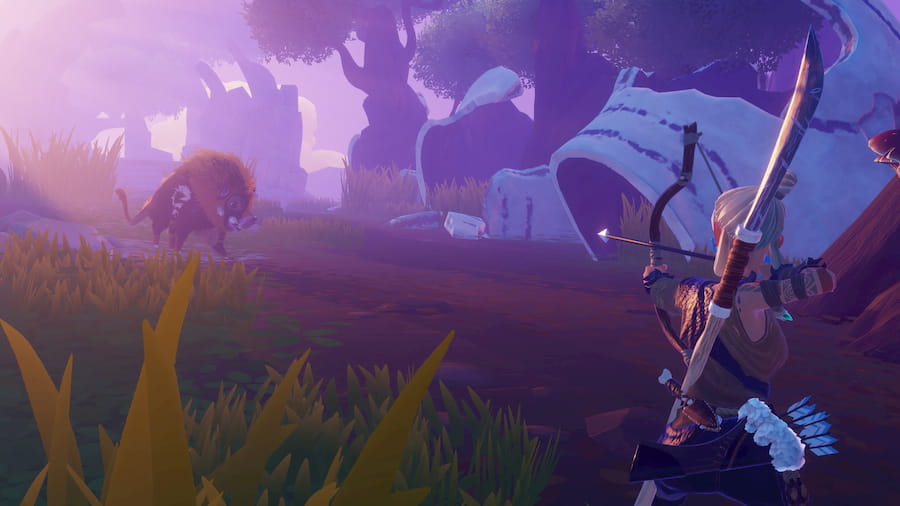 And then there’s the fact that Windbound‘s procedurally-generated nature means you could be fruitlessly exploring for a considerable time. Sailing the seas and exploring islands is fun, but the novelty soon wears thin when you’re searching for that last structure that’s seemingly eluding you. It also doesn’t help that many of the islands I visited didn’t really have anything interesting to see and do on them.

Still, I’m keen to go hands-on with the full version of Windbound. Thanks to its gorgeous art style and unique boat upgrade system, I think many will fall in love with it. It just remains to be seen if Storytelling mode can keep players more invested in its workmanlike structure. Simply vying to survive may turn out to be a much more rewarding endeavour. 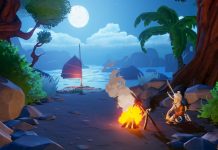 Windbound – Brave the Storm Announced, and It Looks Beautiful