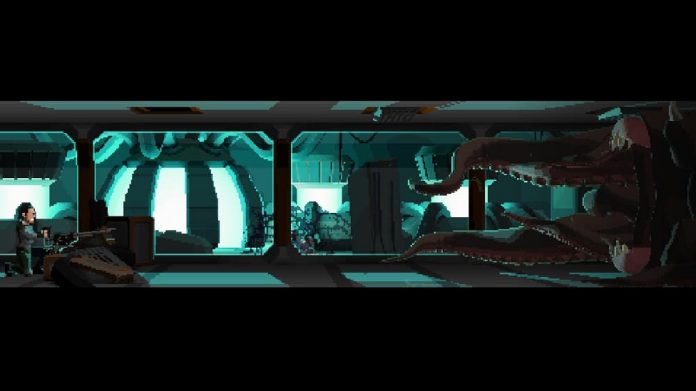 Complications can lead to depth and longevity, sure, but every once in a while it’s good to experience something that just started as a great idea and was brought to life without needless fluff. Something that’s just pure fun from beginning to end. Something like Let Them Come.

A wave-based 2D shooter, Let Them Come is about as simple as you can get. Initially, anyway. Alone on an alien-infested spaceship, the game begins with you hunkered down in a corridor. Occupying the left-hand side of the screen, you then find yourself preparing for an alien onslaught; the only thing standing between you and a gruesome death via a horde of extraterrestrial organisms being a mounted machine gun. 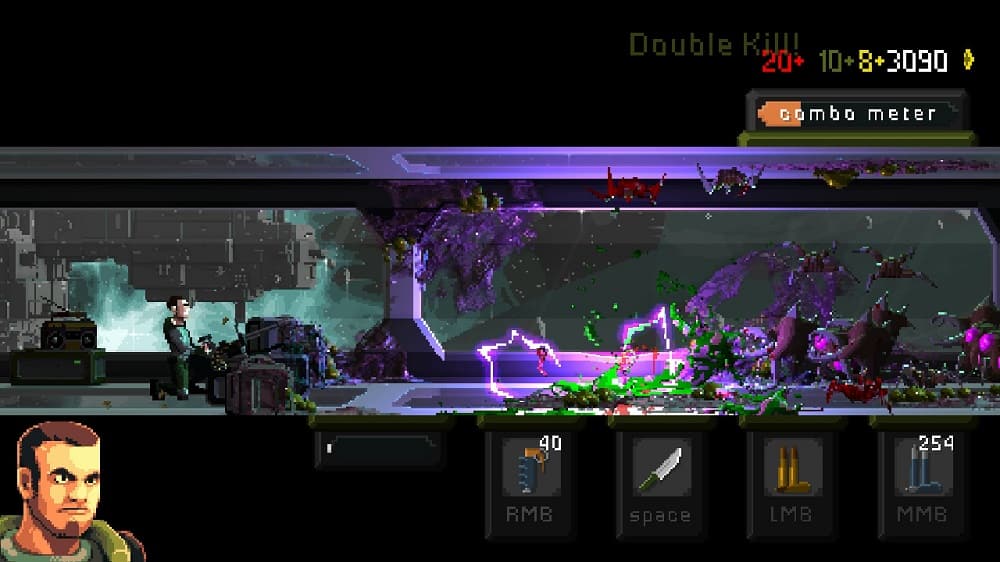 The aliens will come and you’ll do your best to hold them back, but death is inevitable, and with it the game truly begins. From then on it’s a cycle of mass murder, death and shopping until you’ve beaten its 100+ levels, but even that’s not truly the end thanks to a new game plus mode and a slew of challenges. And despite your character still remaining motionless on the left-hand side of the screen throughout, you’ll be hungry to go back for more too. Because Let Them Come is an addictive piece of work.

Progress comes in both small steps and huge leaps, depending on the formations of your alien adversaries. When you start out as humanity’s last hope with just change in your pockets, all you’ll be able to do is aim your gun up and down and hastily swing your knife to beat off any enemies that get too close for comfort, but by killing the approaching threat you’ll accumulate cash which can be used to buy a whole host of goodies when you inevitably bite the bullet. 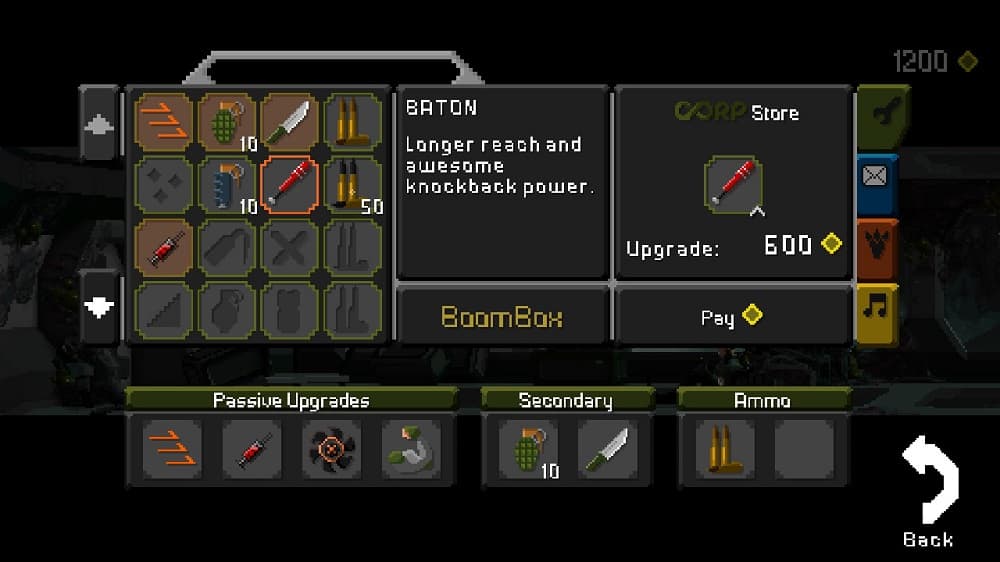 There are passive upgrades which improve your survivability by increasing your gun’s rate of fire, for instance, secondary items such as grenades and melee weapons, and multiple ammunition types that are useful in specific situations. Let Them Come is a game that rewards an inquisitive mind, trying out all the items it has to offer in order to find a loadout that works for you, or even just a current situation. Your gun is powerful, but it is not efficient in all situations and prone to overheating, meaning you need to make use of the other tools at your disposal to progress though waves effectively.

Let Them Come is quite lenient in the way that death doesn’t mean starting back at wave one. Instead, you always begin at the start of the wave you died on, and if you die straight away when you resume, you’re given the choice of either re-shuffling the enemies you face or receiving a handy power-up that will surely enable you to proceed on your next try. When you’re in full swing of things, filling a combo meter allows you choose between numerous power ups too, their length dependent on your button timing. Let Them Come is a game that is no doubt challenging, but it’s also your friend; coming to your aid when you need it most to help you along the way.

The help is more restrained however, when you come up against any of the game’s five bosses. You’ll still be rewarded for filling the combo meter, but it’s often no easy task when you’re fighting just one huge enemy plus a handful of minions. It’s during Let Them Come‘s boss fights that you really need to put your thinking cap on, working out which items are helpful to your cause and when your foe is susceptible to attack. Some may find the boss fights perhaps a bit too frustrating for this reason, but I found their need for strategy a breath of fresh air juxtaposed to the relatively mindless action needed to get to them. 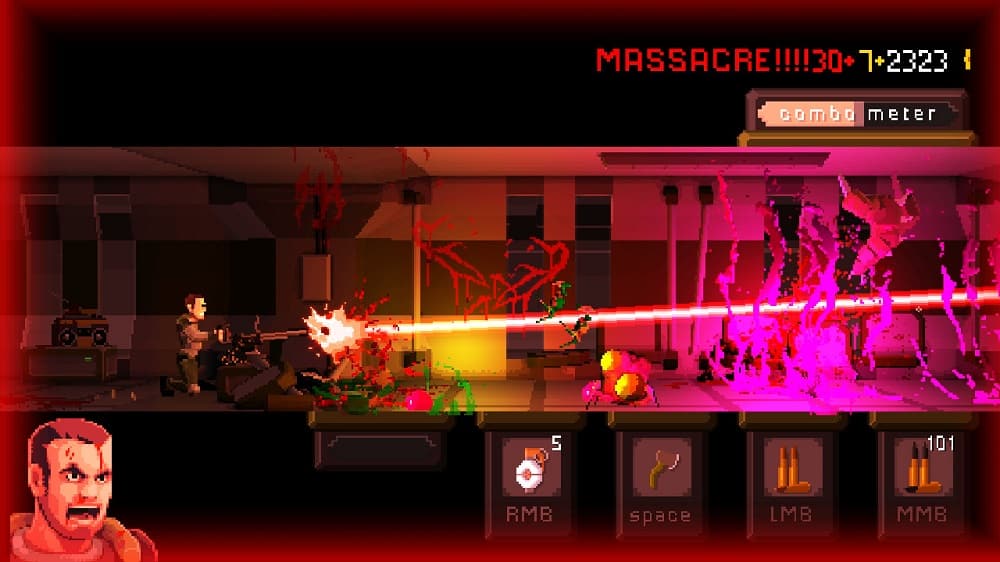 Rounding out Let Them Come’s package is a pixelated visual style that is just bursting with character. Each and every one of the varied alien lifeforms that are out for your blood are interesting in their design, and your health meter being an animated mug shot of your lone warrior’s face that gets worse for wear as he comes closer to death is a great touch. The soundtrack that backs up the action is wonderful too; a collection of rock and synth heavy tracks that is expanded as you proceed further into the game.

It’ll probably only take you two or three hours to make your way through Let Them Come‘s campaign, but it’s an absolute joy from start to finish. And with a wealth of additional content, you’ll find yourself going back time and time again. It’s one of those unassuming games that comes out of nowhere and blows your socks off, keeping you glued to your seat until you’ve finished it; a chunk of exhilarating arcade gaming action that’s not to be missed.

Let Them Come is available on Xbox One and PC. We reviewed the Xbox One version. 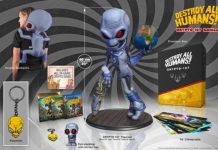 Get a Toddler-Sized Alien With Destroy All Humans! Crypto-137 Edition 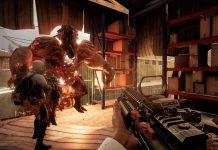