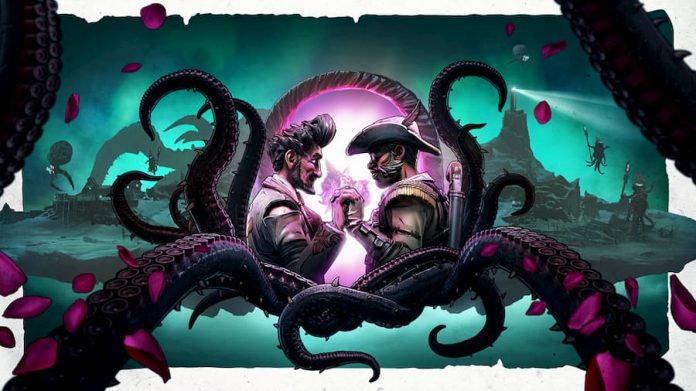 Borderlands 3‘s next campaign add-on, Guns, Love, and Tentacles, is coming next week, so check out this new trailer showing 12 minutes of gameplay.

Launching March 26th, Guns, Love, and Tentacles: The Marriage of Wainwright & Hammerlock is the next big campaign add-on for Borderlands 3, telling a sweet tale of romance and cosmic horror.

After revealing the expansion at PAX East, Gearbox has decided to give fans a better look at the icy setting and the creepy creatures that they will face in Guns, Love, and Tentacles with a new gameplay video.

Set off for the ice planet of Xylourgos, where Sir Alistair Hammerlock and Wainwright Jakobs will finally be tying the not. One problem – a village full of deranged cultists is unleashing forces of otherworldy evil to appease the giant monster who lies frozen in the sky. Teaming up with former vault-hunter Gaige and her robotic BFF Deathtrap, you must fight off this evil if Wainwright and Hammerlock are to join together in (un)holy matrimony.

Borderlands 3 is available on PlayStation 4, Xbox One, PC and Google Stadia. Check out the new gameplay video below, or head over to the game’s official website for more information.