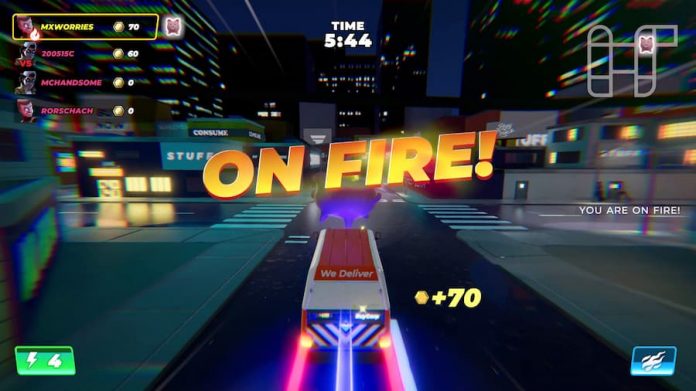 If at first you don’t succeed, piss in a bottle.

That’s a lesson curiously absent from Drive Buy, an arcade car combat game that casts you as a delivery driver. Sure, there are splashes of satire, but writing “consume” on the sides of buildings didn’t help me shake the sensation that it capitalises on the rough deal delivery drivers often get. “It’s just like Paperboy,” I assured myself, but whenever I had time to think, my brain kept telling me things were a little off.

So it works in Drive Buy’s favour that you don’t really get time to think; once you’re launched into a match, things are so frantic you’re doing all you can to stay ahead of your human or computer-controlled opponents (you can cross-play across PC and Switch). There are three modes: Pay Day has you stealing credits, Delivery Battle tasks you with collecting parcels from the middle of the map, and Piggy Bank has drivers fighting for control of a giant glowing’s pig’s head.

Delivery Battle does mean your choice of vehicle matters, whether you go for speed or parcel capacity. But Piggy Bank is, by far, the most entertaining of the three modes. The twist is that once you’ve got the piggy bank, you can’t use any of the in-game weaponry, which you’d normally use to blow up or disable competitors. Instead, you end up frantically racing around the relatively small map, boosting to avoid the weapons you’re now finding trained on yourself.

From a design standpoint, being able to boost makes sense, since otherwise it’d easy for your enemies to keep ganging up on you. But having it recharge instead of forcing you collect pick-ups makes for an oddly stilted experience where you’re driving, then boosting, like riding with someone who keeps stamping on the accelerator. 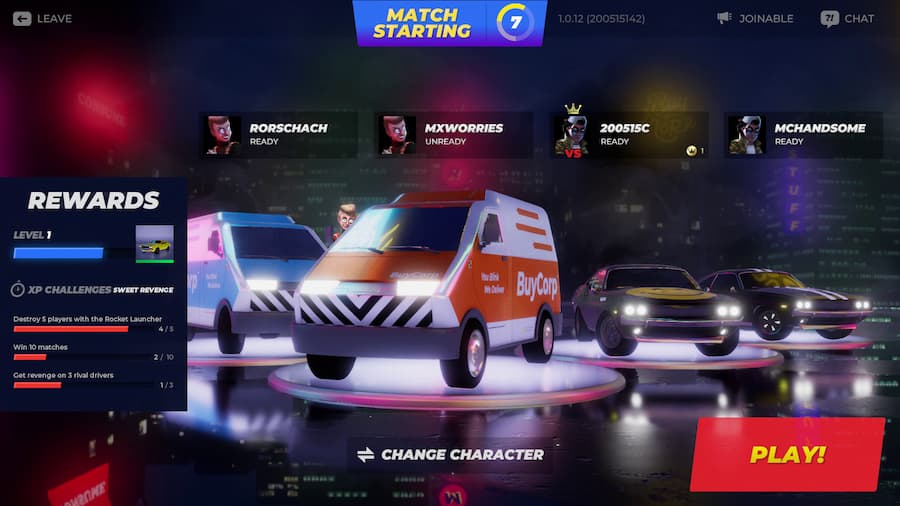 In fact, Drive Buy is a bit of a rough ride all round. Yes, it’s fun to dip into and the vehicles handle well, for an arcade game anyway. But it feels like an Early Access title; it has a whole bunch of unlockable characters, online achievements and so forth, but there’s not enough game here to warrant spending time to unlock them.

The separate login, for example, feels completely irrelevant. No, I’m not talking about Steam; Drive Buy requires you create an additional logon for a separate system. On top of that, there’s no option to play offline – even if you want to play against bots, you still need to be logged into that same system. We set Steam to offline mode and disconnected our Wifi – and Drive Buy wouldn’t let us past the title screen. On Switch, we enabled Flight Mode and couldn’t load the game without disabling it. 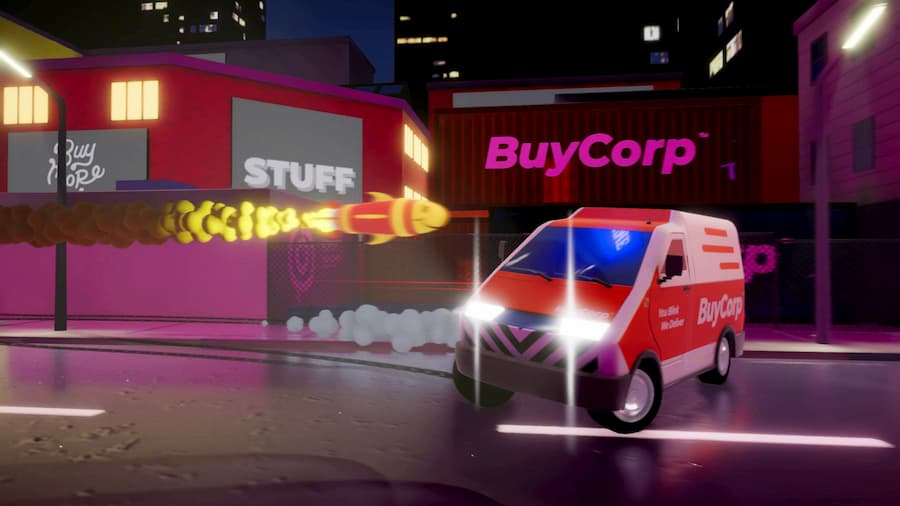 But as frustrating as its login system and need to be online is, it’s Drive Buy‘s distinct lack of content that really holds it back. There are only three small, boxy maps, which most players will get very quickly bored with. Developer Glitchers is planning on supporting the game with seasonal content, which is good to know, but considering this is being sold as a full product with a £20/$25 price tag, there’s just not enough here.

Drive Buy can be fun in small doses and there’s definite potential here, but if you’re looking for something substantial, it doesn’t deliver just yet. It feels too much like an Early Access product to be worth the asking price. Should the developer follow on its promise to add more content, then it might be worth jumping into. But for right now, we can’t recommend it.

Drive Buy is available on PC and Switch. We reviewed the PC version with a code provided by the publisher.