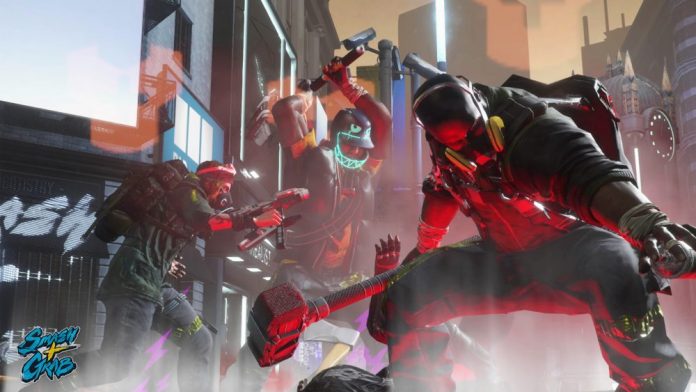 A Since League of Legends and Dota 2 dominated the MOBA scene, many games have come and gone with their attempts at emulating the popular genre themselves successfully.

Whilst some titles have done very little to differentiate themselves from the standard 5 vs 5 fantasy-based design foundations, Smash + Grab makes a very clear effort to be new and different, opting for 3 vs 3 and having its design set in a dystopian city, where two different gangs face each other off to see who can loot the most.

Smash + Grab is essentially what you would get if you made The Warriors into a MOBA title, and placed focus on looting. Coming from the United Front Games, developers of Sleeping Dogs, it’s no surprise that the game has a strong focus on melee combat. Obviously, Sleeping Dogs did a good job with its combat system, and that continues on through here. Combat is satisfying, and whilst you’re mostly limited to either mashing the attack button or grabbing someone for a grapple move, the variety of animations and finishing moves means that it never feels repetitive. It’s one of those fighting systems where anyone can pick up the controls quickly and mash the attack button, but feel instant gratification as your character performs impressive combos and makes it look cool.

Being a MOBA style game, you have a number of Champions to choose from, each coming with their unique set of abilities. Some abilities are aggressive, others are defensive or passive, whilst some have dual functions, such as a charge ability which can be used to engage a fight, or even to retreat from one with a quick boost of speed. You also have the ability to dodge roll and sprint, but more importantly, you also have the option to modify weapons. As the match progresses, you can add modifications to existing weapons such as icy hammers which slow enemies. The heart of the game, however, is in getting your hands dirty in a crowded brawl. 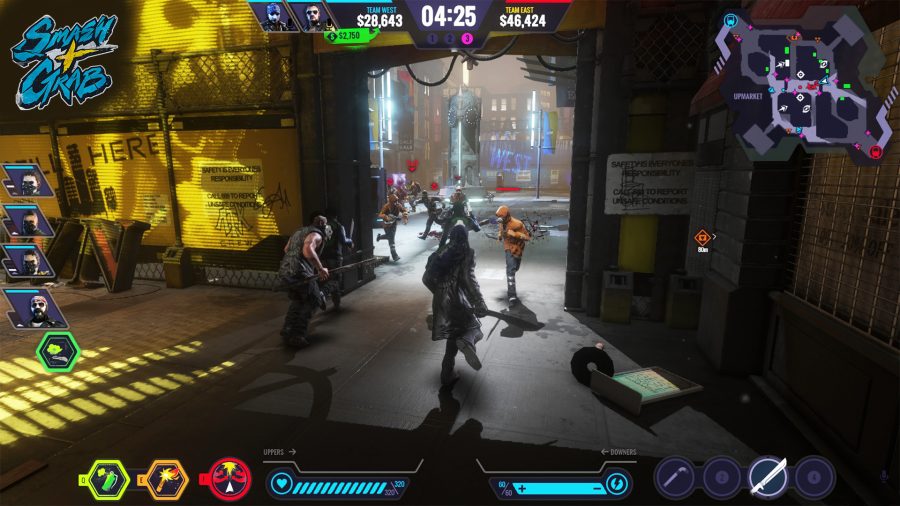 The goal is to loot $50,000 before the other team. You have one gang pitted against the other, with each gang having three groups, consisting of five members each. Each group has a commander who has both active and passive abilities, a Lieutenant who has some buff-style passive abilities to help the group, and three grunts who are there to simply make up the numbers. It’s advised that you split off and try to take as many stores as quickly as possible, but there are moments when groups begin to converge on one position, and tense moments escalate into an all-out brawl between both gangs. These make for some fun moments, where abilities are flying left, right and centre, and it’s unkown who will emerge from the fight victorious.

Smash + Grab‘s looting system is fairly simple; you run up to a shop window, and your entire group begins pummelling until the health bar of the shop reaches zero. Some shops may be contested, as the other gang will want a special type of weapon, or will want a large sum of money quickly. The effects of looting a shop window are well designed, as the windows bend and crack as your group continues to whack away at them, the glass elastically swaying back and forth under the constant barrage of looters. It’s a small touch, but it’s nice to see extra care added to the visual effects, making repetitive actions that bit more interesting.

Some time into the match, there are two modern high-tech stores that open up on each side of the map, guarded by high-level security A.I. There’s an obvious advantage to raiding these and acquiring their loot, but it requires participation of many looters – ideally with upgraded weapons – to pull off successfully. You also have to judge whether you want to invest all of your manpower into raiding one of these locations, but leaving the other open for the rival gang to raid, or if you want to split off and risk taking longer to raid the store and being caught off-guard by an enemy group. It’s a juggling act, and the only way you’ll make good decisions is by constantly being prepared: keep your own weapons upgraded, and keep tabs on the whereabouts of the rival gang. Personally, I’d want a splinter group with an aggressive commander to stall the enemy raid, whilst my main raid group, with high defensive skills, locks down the area safely and defends against both the enemy gang and the security A.I.

Smash + Grab‘s focus on a smaller player count of 3 vs 3 enables better teamwork, a tighter focus on positioning and how you spread your assets/tools/abilities across the map. Coupled with a generally smaller arena in comparison with other MOBA games, it  mean that there are higher chances of interesting engagements happening on a higher frequency, and quick decisions can be made on the fly which impact the game in a serious way. In other MOBA games, the arenas are so big in relation to player speed that if you fail to prepare beforehand, there’s often no time to rectify a situation where a player gets caught out. In Smash + Grab, I feel that if a teammate gets tangled up with the opposition, I can get there relatively quickly, making a conscious decision of ignoring a small cash grab to help out someone in need. 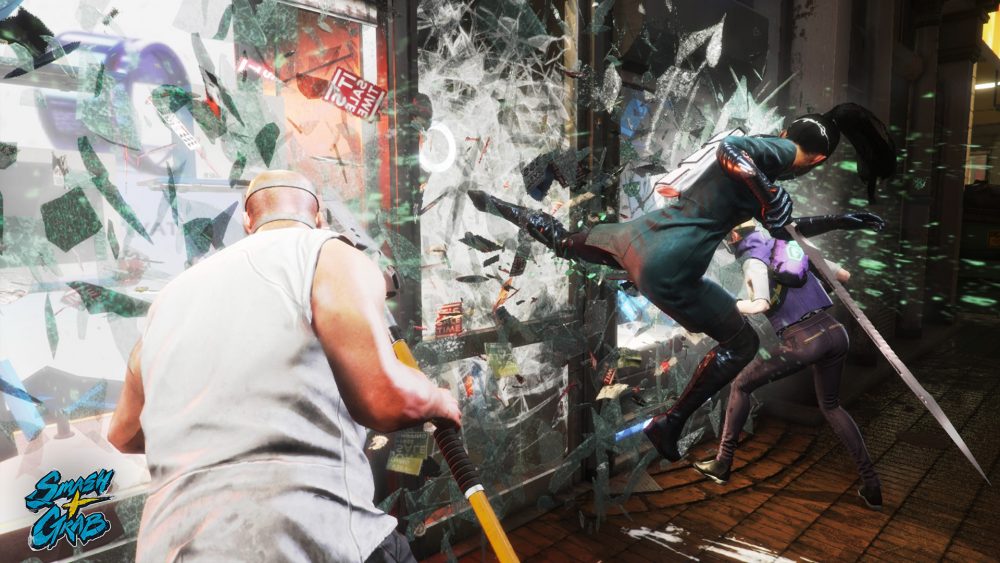 My only hope now is that Smash + Grab continues to grow its high level quality throughout its Early Access period. So far, it’s shaping up to be a great game, and I would definitely recommend jumping in early if you like action brawlers with simple but fun fighting mechanics. You don’t have to be a fan of MOBAs to get the most out of this experience; the strategy side of things only really affects where you should go next or what to do next but ultimately, the core experience lies in the joy of smashing things and people up. All in all, Smash + Grab is already an incredibly fun experience that anyone can enjoy, especially with short matches encouraging you to drop in for a game or two in your busy day. In the same way I would recommend a game like Destiny as an first-person shooter rather than an MMO, I would recommend Smash + Grab as a third person brawler, mostly ignoring its MOBA inspirations, because it honestly doesn’t feel like one that much.

Smash + Grab is available on PC via Early Access, with a full release slated for Spring 2017.