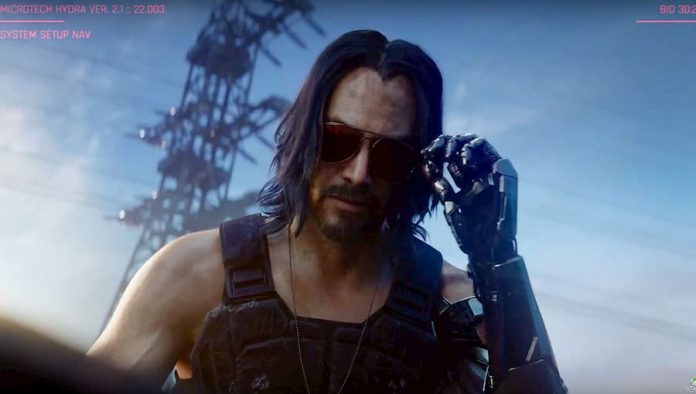 But with the release of the latest E3 trailer, so much more seems to have been both hinted at and confirmed.

On the surface, the biggest takeaway from the new cinematic trailer for Cyberpunk 2077 may well be Keanu Reeves’ involvement. However, when compared with the gameplay trailer released last August, so much more becomes clear, and it may even hint at why Keanu Reeves states “we have a city to burn.”

In the original gameplay trailer, we are introduced to V’s friend, Jack, who directs the customisable protagonist to a new mission contact: Dexter DeShawn. He is described as “one of Night City’s biggest players”. He’s also the villain who wants V killed in the most recent cinematic trailer.

However, before Dexter gives V this dangerous mission, he gives V a test; he needs to be sure “you’re alright”, as he puts it. The latest trailer indicates that V does pass the test as the bigger mission Dexter has is more dangerous, perhaps linking to why the mission didn’t go according to plan in the cinematic trailer.

It’s understandable that V would want revenge against Dexter DeShawn for his attempted assassination. The gameplay trailer also describes Night City as a place where “violence and oppression are the norm”. Therefore, it’s likely that Dexter may own a lot of the city, and have a lot of influence, which is why Keanu Reeves’ character wants to help V burn it down.

Also, the gameplay trailer makes it clear that Jack is not just an accomplice; he’s a friend. And seeing Jack killed due to Dexter’s mission is probably another reason why V wants revenge. Although it’s unclear why Keanu Reeves’ character wants to help, or wants revenge himself, no doubt there is another captivating story behind his character too.

These trailers also seem to indicate that last year’s 48 minute gameplay trailer is from very near the opening of the game, and the latest E3 teaser is set a few missions after that. It’s a great story arc to build Cyberpunk 2077 around, and seeking revenge on Dexter Deshawn may well be the main goal to the story.

Cyberpunk 2077 will release on April 16th 2020, for PC, Xbox One, and PlayStation 4. CD Project Red’s latest release may well be its biggest to date, and V’s story involving Dexter DeShawn and Keanu Reeves’ character are sure to be huge parts to Cyberpunk 2077’s success.

You can pre-order it now at Amazon.