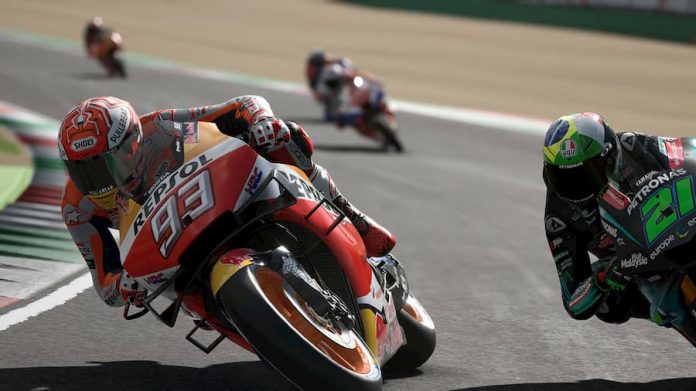 Although most real-life sport has now been cancelled, you can still watch some simulated motorcycle racing in this first official MotoGP 20 gameplay video.

Yes, while the ongoing public health crisis surrounding COVID-19 has put a stop to the vast majority of spectator sports, it won’t stop us simulating them with computer games! The latest officially licensed game of Grand Prix motorcycle racing, MotoGP 20, is set to launch on all platforms on April 23rd. Milestone has recently released the first official gameplay footage, featuring conditions as voted for by the fan community – Valentino Rossi on the Mugello Circuit in dry weather.

We considered last year’s MotoGP 19 to be quite a large improvement over its predecessor, so we’ve got high expectations for MotoGP 20. More realistic physics and bike behaviour is supposed to make the game more technical and skill-based, with new fuel management and asymmetrical tyres’ stress mechanics adding even more layers of strategy and skill to truly master the MotoGP Championship.

Wear will not apply to both sides and the middle of tyres equally, and damage from crashes and collisions can have a permanent effect on your bike’s handling, just like in a real race.

MotoGP 20 will be coming to PlayStation 4, Xbox One, Nintendo Switch, PC and Google Stadia on April 23rd. Check out the new gameplay video below, or head over to the game’s official website for more information.