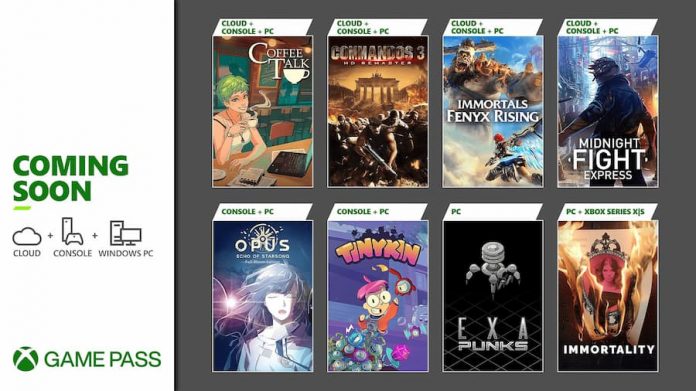 Xbox Game Pass’s second August wave has been announced and there are some promising titles lined up.

Coffee Talk, for example, is an adorable game that sees you running a coffee place where your customers are supernatural creatures such as succubae, elves and so forth and you have to listen to their problem as you serve. It’s available right now if you want to dive in but that’s just one of August’s second wave of Game Pass titles.

There’s also Immortality, the latest from Sam Barlow, creator of the superb Telling Lies and Her Story, about a film star who apparently disappears. We haven’t had got our hands on it as yet, but we hear Edge Magazine has awarded it a rare 10 out of 10 and given how much we loved Her Story, August 30th can’t come soon enough.

We could go on, but we’ll let you choose what tickles your fancy. Here, then are all the games arriving on Game Pass – for PC, Xbox and Cloud – this second half of the month.

Commandos 3, Immortality, Midnight Fight Express and Tinykin (a Pikmin-a-like which we’re also looking forward to) are all Day One releases.

On the downside, there are also several games leaving Game Pass this August 31st, which are:

So, yes, Game Pass is gaining eight games and losing ten, but there should still be an awful lot to keep you busy. And don’t forget about the first wave of August Game Pass additions, which you can find here. Yes, Two Point Hospital is leaving but the Two Point Campus, a University sim from the same developer, has joined Game Pass on its day of release and it’s fantastic.